Yesterday I sat down to watch the BBC’s new reality TV show, ’24 Hours In The Past’. The premise follows a dreary pattern you’re likely already familiar with; six near-celebrities are rounded up and put through a bunch of ordeals. They struggle, then admit how fortunate they are to lead the cushy life they do. Audience feel a schadenfreude-based superiority; show gets decent ratings.

So, yes, there is a problem with the format. The focus should, rightly, be on how modern people adapt to historical situations. This is why I still cling to the hope that Rome Sweet Rome (the story of a modern American military force somehow transported back in time) will still be made into a feature film. However, the very act of dropping someone into the situation sets them up to fail.

Perhaps the only positive thing about ’24 Hours…’ is that the contestants were happy to cheat. Knowing that they wouldn’t be able to make the grade, they stole from their ’employers’ and put together crappy work with a veneer of quality. 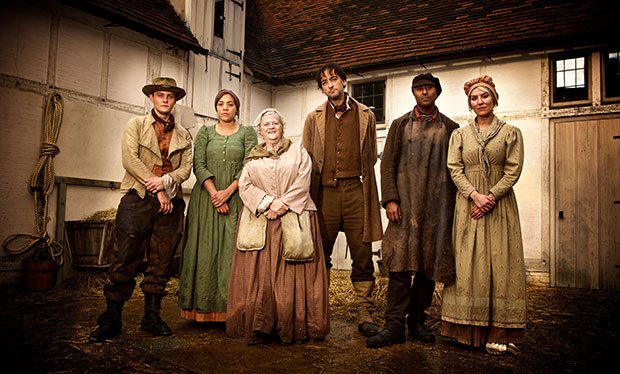 And this is A Good Thing. I’d like to think that if I was sent back into the past, I would be able to employ some modern ingenuity to get a leg up. However, the reality would probably fall short of that. I don’t actually really know much about how modern technology works, and there’s a good chance I can’t event speak the language of the period I get sent back to.

If I can’t cut corners like that, I’d like to think I’d be able to cheat the system a little and avoid the long-term consequences. 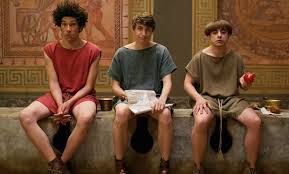 I don’t want to beat around the bush here (you never know what might be in there) so I’ll just say it; shit is funny. It’s an awkward subject, and rife with tension. Nothing makes for a good punchline like a bit of tension.

But it’s not just that there’s tension, there’s also a lot of weirdness in our toilet habits. Yes, generally, but also historically. The Romans, for all their lauded sanitation, mainly preferred communal toilets, and wiped with a sponge on a stick. Some scholars reckon you could pay extra to get the first use.

Henry VIII had his ‘Groom of the Stool’, a desirable rank, where a member of the gentry could enjoy unparalleled access to the monarch… but also had to clean up afterwards. It is also hinted at that this may be where all those ‘privy councils’ spring from. 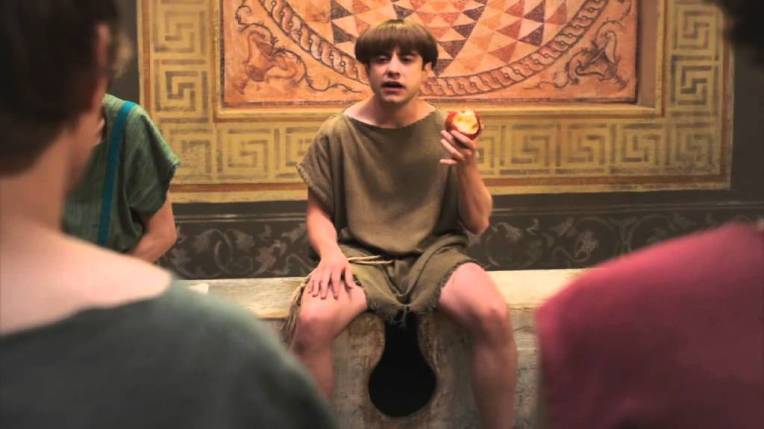 Author and Horrible Histories researcher Greg Jenner had this to say: ‘Freud said faeces was funny because it is a childhood obsession, we go through a phase of being hung up on shitting as toddlers. But shit is also a useful metaphor for the distinction between modernity and history – our age is shitless, theirs was shit everywhere. So it’s not just funny in of itself (which it is), but also it serves to heighten the historicity of the setting.’

Finally, and most importantly, crap is a common denominator. Everybody poops. And it’s hard to take someone too seriously when you know they are slaves to the toilet, just like everyone else.

This time last month I was blogging about Poldark and redcoats. I got turned off Poldark pretty quickly when it became clear that there were going to be far more longing looks than actual action. But when another series turned up on my radar, fronted by another former Being Human cast member, I couldn’t really ignore it. ‘Specially as it has redcoats.

Banished is set in a penal colony in Australia, and just as  a concept, that’s pretty interesting. It also has a pretty damn good cast; in the lead is Russell Tovey, who I’m still convinced was once one of Crabbe and Goyle (apparently it’s not true, but it should be). Then you’ve got Rory McCann, who you’ll recognise as Game of Throne’s ‘Hound’. The reverend is Ewen Bremner, who was ‘Spud’ in Trainspotting, then there’s Orla Brady, who you lot will remember from Wurthering Heights. Finally, there’s good old David Wenham, who has been in everything from 300 to Lord of the Rings.

So yeah, it’s a well cast series. It is also set in a really interesting time and place. At one point the governor of the new penal colony muses on how his friends asked him when he was leaving. He later realises that what they were really asking was when the scum of England would be taken away. Transportation seems like a massive effort to take, given that many of the prisoners were only serving set-length sentences. There’s at least one Australian joke that points out the British must be mad if they discovered such a paradise and sent their prisoners there.

One thing the series isn’t, is gentle. A thousand convicts and a hundred soldiers, a long way from home, and it was never going to be pretty. Unlike other series, it doesn’t shy away from showing blood onscreen, or examining just how hard things were for women. Family viewing, it ain’t.

But overall, the series is running along fairly well, and while my tastes might be the same as everyone’s, I expect to continue watching this one longer than I did with Poldark.

This week I have been watching the BBC’s new film, ‘The Ark’. This, in itself, is a bit surprising, given my dislike of bible films in general, and Noah films in particular. But something in the trailer gave me hope. I think it was the mud-brick huts…

And yeah, it’s really good. It’s written by Tony Jordan, who has previously covered the Nativity story. It’s suitably light-touch when it comes to biblical stuff, with most of the weight going on the drama that exists within the family. The lead role is taken by David Threlfall, who is best known for his role as another patriarch in Shameless.

One thing you won’t get from the trailer is just how funny it is. There’s a lot of coarse, jokey humour and plenty of family banter. At one point two sons tease a third about how he isn’t getting any in the sack. That may be exactly why the whole thing works. When the family gathers round the table and squabbles over food (which they do at least four times in the 90-minute film) you can really feel the love. When that turns to anger and squabbling, there is a real tragic pathos to it.

Where it falls down is on the core elements that you’d expect from an Ark story. The whole two-by-two sequence is taken care of in one silhouetted CGI shot at dusk. The flood itself is represented by a weird CGI sequence with tectonic plates shifting about under the ocean. I would’ve been happier with big murky tidal waves.

It’s also likely to do something that Russell Crowe’s ‘Noah’ spectacularly failed on, which is to satisfy both the believers and the unconvinced. All-in-all, it’s definitely worth watching.