Hallowe’en is a little over a week away, and for those of you who would like to reference their passion for historical costumes, I thought it would be interesting to throw some ideas out there, for you to use as you see fit. I, myself, will be going to the Egyptology Live Friday event at the Ashmolean as an unspecified early archaeologist. If you can get there, I totally recommend you go too. It’s free, and awesome fun. I wanted to be Carter or Petrie, but I just can’t grow the beard in time *sheds a single tear*.

I won’t be doing any ‘sexy’ female costumes, because as far as I can tell, you just cut stuff off the standard version. Also, as I understand it, the definition of a sexy has changed significantly over the centuries. Bring back ruffs, I say. They could be hot.

Polly was a pro at hiding hickeys. pic.twitter.com/ZR42U08171

First up, Cave Person. For this, go all Macklemore and get yourself a second-hand fur coat. cut the sleeves off, and use them to hide your footwear. Lash it all together with a few old belts; BAM, you are ready to fight dinosaurs… or something.

Next on the list, Mummy. This is a strong choice for anyone on a budget, or who didn’t prepare anything earlier. Just head into the toilet, put one end of the loo roll between your ankles swivel on the spot. Yes, you could go higher budget and buy gauze bandages, but if you’re going to do that, you’ll just look like someone with no imagination. And considering you’re already looking on a blog for ideas, frankly, you could do better.

Then, the Classical Greek. Purists may prefer a toga, but a historically-accurate toga takes a metric shit-load of material, and is confusing as hell. To do this you will need a sheet, two safety pins, and a belt. Try to avoid fitted sheets, but if you get one, cut the elastic out and straighten out the corners. Fold it in half, put safety  pins roughly where your shoulders will be, then step into it from the open side. The belt will hold everything in place. I have rocked this look myself in my uni days.

Word to the wise, it’s October/November, and frankly this outfit offers no protection against the weather. Even with shorts and a vest underneath, this was still DAMN COLD. Take extra scarfs, or a coat, or something. Or just don’t go with this outfit.

Roman / other armoured individual. The crucial part of this costume is metallic duct tape. N00bs will go for tin foil, but this is a mistake. Foil will not stand up to an evening’s wear and tear. Either layer it up by taping it to a top you already own, or fix the tape back-to-back. When you finish, it will just look like a metallic top, so you’ll wanna embellish with additional decorations, heraldry, etc. Consider taking your collander along and decorating the hell out of it ’til it looks like a Roman Gallea. Job’s a good’un.

This outfit will also work for knights and their ilk. Needless to say, taping an entire outfit up can get a bit tiring, so you can mix things up with a colourful tabard. Girls! I fully support the idea of an armoured woman. If anyone asks, you’re Joan of Arc. None of this videogame armoured underwear.

And as far as I’m concerned, costumes get a lot more fabricy from here onwards. If you have any other ideas, or you actually try one of these out, please leave pictures in the comments section below. If you want more ideas about historical outfits (tasteful and tasteless) check out our clothing articles.

I’ve got a bit of a drunk groove on at the moment, so I’d like to share that with you while you read this blog. Grab a glass of classy red plonk and listen to the following:

So. Anyone who follows me on Twitter or w/e will know that my avatar is a Lego centurion with specs. I have a cubic brick-shaped place in my heart for the building blocks. I recently went and bought a Lego Star Wars advent calendar (get them now, kids, they’re in high demand) and it was the best £25 I have spent in recent years. The weekend before that I went to the Great Western Brick Show, and hung out with the guys at Brick to the Past, who I have previously interviewed for this very blog. So yeah, that *kids* thing in the title also applies to fully grown people. 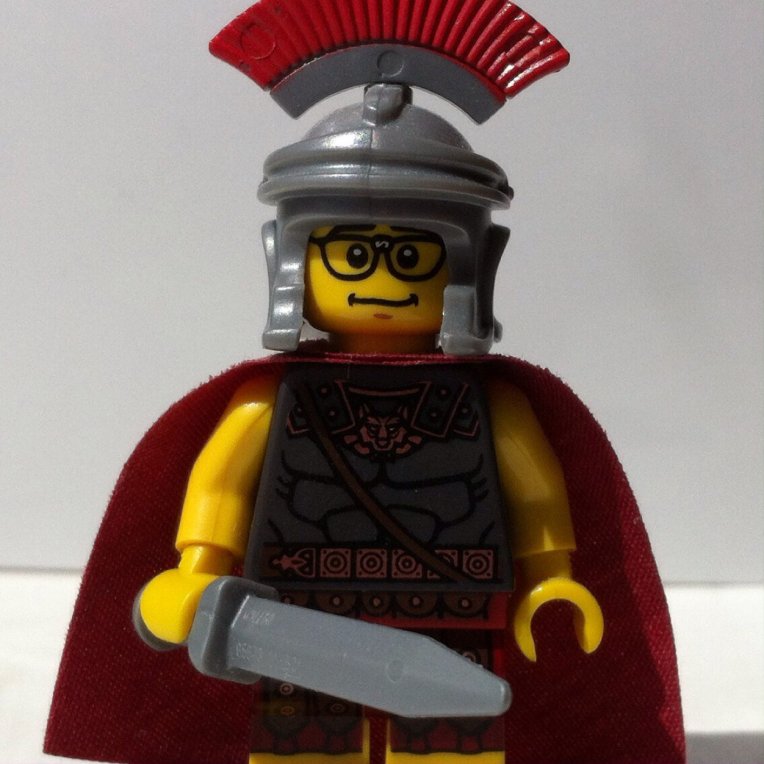 One of my strongest memories from childhood is of playing with a set of Playmobil  jousting knights. Which is really meta, if you think about it; a kid playing with toys of men, who are playing at warfare. Just me? Well, anyway, somewhere along the line, I thought it might be an interesting idea to dissect that whole knight-in-shining-armour fascination.

The first topic must, necessarily, be violence. People are obsessed with the thought of damaging one another, even if that only manifests itself very rarely. We are a destructive race, and kids especially. Part of that is simply because it is easier to destroy that it is to create, and the other part is that kids haven’t really developed their creative skills. Seriously, the things I saw at the Great Western Brick Show took serious thought and artistry. More concentration than most kids would be able to muster.

However, you’ll also notice the relative lack of weapons in this picture. In the whole metres-long build there were only five (5) soldiers. So this is definitely something that people (mostly) grow out of.

One definite part of the fascination is all about costumes. Kids have imaginations that can turn a stick into a plethora of things, but the more props you give them, the deeper the fantasy gets. Armoured soldiers have the ultimate combination of costume and accessories, along with a distinctly defined role. You get a sword or an axe and you go out and defend your city. It’s the best thing in the world. Don’t get me wrong, princesses may have better costumes, but their exact function is way more vague. You can’t smite things if you’re a princess, can you? (Can you?)

The other side of things is that soldiery is an active thing. Beyond sportsing, fighting is one of the most active things you can do as a kid. You’re being really active with another person. Not like running, or its ilk. Toys are all well and good, but no self-respecting kid is just gonna build something and then leave it for people to admire. They want to have little people interacting, because that’s what playing is; figuring out how people interact, and why.

The booze seems to be wearing off, so I’ll stop now. Please let me know what your thoughts on the topic are though. Ross out.

I’m not the right man to talk about the mad weirdness that is Putin, but portraying yourself as Hercules is nothing new. Loads of people have done it; from Alexander the Great, to Pompey Magna. And yes, more recent people have done it too. This art is neither subtle, nor particularly brilliant, but then, neither is the man himself.